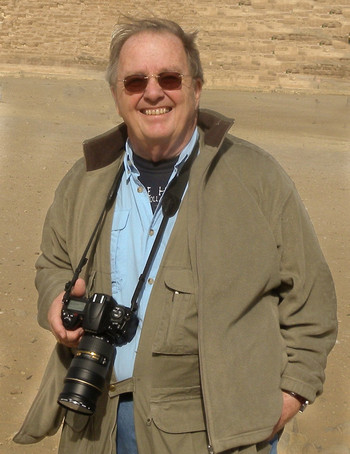 Like many photographers, I got my first camera when I was about six years old; I loved making pictures and “had a good eye.”  But thereafter, my story diverges from that of most photographers. I was good at science and math in the time of Sputnik, so I became a physicist, got a PhD at Cambridge University in England, and spent a career as a university professor, dean, and vice president. Photography was a hobby that let me record my travels but not a passion.

When I retired from academe in 2008, I still loved making pictures, but I wanted to know what “having a good eye” meant. So my daughter, perceptively, gave me a photography workshop as a retirement present. Since then, with help from some excellent mentors, I have developed my style and my portfolio. My works have been shown in solo shows at Restaurant Eugene in Atlanta and at the Vinings Public Library in Smyrna, as well as in other shows in Atlanta and around the country. In 2018, my portfolio of nine street portraits received Honorable Mention in the International Photo Awards Portfolio Contest and an Award of Excellence in the Black & White magazine Portfolio Competition; and my photo “Five Friends at the Pool” was displayed full-size, sixteen feet by eight feet, on a billboard as the winner of the “Writ Large” competition in the North Carolina Click! Photo Fest.

I live and photograph in Atlanta, where I serve Atlanta Celebrates Photography, the region’s primary photography center, as chair of the Development Committee and as a member of its Board and its Executive Committee.

Atlanta Artists Center, "On the Bridge," First Prize in “All Points of View,” May 2015